Is Libya Safe Under Mustapha A. Jalil? 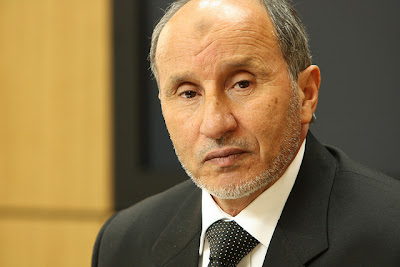 When former Libya tyrant, Muammar Gaddafi was toppled and later summarily felled, the world went frenzy crazy with the sigh of relief. Dictators in western countries who pretend to be the tutors of democracy congratulated each other for getting rid of undemocratic dictator. Was it right or wrong? Time will surely tell. Now that months have lapsed and news is breaking those rebels who toppled Gaddafi had different aims and agendas altogether. Mistrust and confusion are high. This secret was revealed by the capture of Seif al Islam, who is believed that he was groomed by Gaddafi to take over had anything happened as it was the case in Syria, Togo, DRC, Gabon and North Korea where sons of former presidents took over after their fathers died.

Mistrusts and division forced donor countries to not give frozen Libya’s money to the new regime as it was recently revealed. "The Libyan money is not yet liquid and useable. The donors don't want to give more. Are we going to wait three months to deal with these emergencies?" Georg Charpentier, UN Humanitarian Coordinator, posited at a meeting of heads of agencies in Tripoli in November.

Many Libyans are concerned and they don’t know what is going on. "We're now selling over a million barrels a day - that's $100m (£64m) a day," says Sami Zaptia, the managing director of consultancy firm Know Libya. He adds, "It's a question of where is the money going? Is Libya paying off some debts? Are we paying NATO? What's happening? It's big money."

Since this secret of animosity and division among the rebels came to the agora, the west has kept mum thanks to the doubt this situation create. Will Libya end up becoming another Iraq or Afghanistan? Who knows? Before concluding or passing verdict, we need to examine the current dictator who is running Libya. This is none other than former Prosecutor and minister for justice who is currently the head of National Transition Council, Mustapha Abdul Jalil.

Abdul Jalil was born in 1952 and he is a lawyer by trade. From 2007 to 2011, Abdul Jalil was Minister of Justice or officially, the Secretary of the General People's Committee of Justice under Colonel Muammar Gaddafi. In a simple language, Abdul Jalil was doing Gaddafi’s laundry when it came to apply law. Therefore, his hands are dirty full of filth and the so-called nasty past that shaped Gaddafi and his notorious regime as it is defined by western notorious regimes. In other words if you hate Gaddafi, you must, so too, hate his laundryman Abdul Jalil. What a type that is Abdul Jalil who used his profession to amuse the person he blackmail and now calls dictator? What hypocrisy for such a laundryman to stand on the agora and start throwing stones at his master? This is a very question many thinkers are asking with regard to the future of Libya. Will Libyans overlook this dirty and stinking legacy of their current leader? If they do, what next after the euphoria of getting rid of Gaddafi is over? Will they turn all stones or ignore the reality for their peril?

Like current Egyptian strongman, Field Marshall, Mohamed Hussein Tantawi, will Abdul Jalil get away with it and save his skin or being booted out like Mohamed Ganouchi in Tunisia? If Gaddafi was a butcher, Abdul Jalil was his henchman.

More on Abdul Jalil, before even toppling Gaddafi, he had already proved how he was going to follow the trend of the person he was demonizing. He killed Major General Abdul Fattah Younus former Gaddafi Minister of Interior who goofed and defected to join rebels who later killed him. Up to this moment, Abdul Jalil has nary bothered to provide any explanations regarding the death of such a senior person in his struggles! Even the death of Gaddaffi speaks volumes about the man in Tripoli. Will he get away with it? Will Libyans turn tables against him as Egyptians are currently trying to against Marshall Tantawi?

Is Abdul Jalil a new crop of coup d’ etats in Africa? Those who remember how many African junta leaders came to power, are aware that they were created and supported by western countries who found that democratic or the regimes they toppled did not safeguard their vested interests. Likewise, the big question with regards to Abdul Jalil is, did west create him to safeguard their interests that Gaddafi endangered? If not, why then don’t western powers talk about dealing with all those that helped Gaddaffi to commit alleged atrocities? Is Abdul Jalil a good boy before west and therefore a traitor against Libyans? Britain helped Idd Amin to topple a democratically elected government so as to stage dictatorship that would safeguard Britain’s interest. Will Abdul Jalil accomplish this or turn inot a mad dog like Idd Amin?
Source: The African Executive Magazine Jan. 25, 2012.
Posted by NN Mhango at 05:19