WITH DOGS IN STATE HOUSE THIS IS WHY AFRICA IS POOR


Posted by Ndugu Nkwazi N Mhango at 21:21 No comments:


Posted by Ndugu Nkwazi N Mhango at 18:14 No comments:

ALTHOUGH I wrote about it before his excellency President John Pombe Magufuli said it, I am happy to hear him reading from the same vis-a-vis Africa's incomplete independence. I am staunch believer in self-reliance through disciplined utilisation of our resources. Hearing it from president Magufuli, I am sure, the wider audience will subscribe to this way of thinking and doing things, which, to me, is a new awakening for Africans to take their destiny into their hands as soon as possible if not urgently.
How many African rulers, think this way? If anything, this way of thinking differentiates Magufuli from rulers that Africa has in plenty. By being differentiated and separated from rulers, Magufuli prove how he truly is a leader. One of the aspirations of any leader is to develop those he leads while a ruler aspires to amass wealth even when those he rules are manmade paupers as it is the case in many postcolonial Africa. Magufuli wants to deconstruct the  colonial narrative that make us believe that we will develop by receiving handouts from our former colonial monsters.  Actually, Magufuli indirectly subscribes to the truth that Africa is the one that developed Europe and made it rich.
Although many African rulers are afraid of attempting what Magufuli is now doing, it is but sheer fear. Africa has what it takes to depend on itself. Apart from being endowed with humungous reserves of resources of value, Africa used to depend on itself when it was operating on its own policies and ways of doing things before the introduction of slavery and colonialism followed by capitalism and neocolonialism so as to end up in beggarliness wantonly. Needless to say, Africa has the potential of manpower that top up material resources such as minerals, friendly weather, fertile soil, rivers, lakes, and resilience that enabled it to make do with such brutal and exploitative systems of modern superstructure universalised under globalism, internationalism and many sweet names colonial powers invent and like to use and popularise. Academic, activists and all those who aspire to stamp africa out of beggarliness and abject poverty need to support and learn from Magufuli. Essentially, what is need is nothing but courage and self-confidence that changes can't come from out of the blue. They are brought and effected by us. Again, without Africa uniting, it become a piper dream for the entire continent to become independent. This is because we still have Africans who still believe that without their colonial masters' support they can't develop as if before having such masters life didn't exist in Africa. Sometimes, I wonder how Africa was able to discover fire, agriculture, iron and other essentials and depended on itself for millions of year fail to rebel against mental slavery and mental colonialism resulting from the colonising and toxifying the minds of its people. 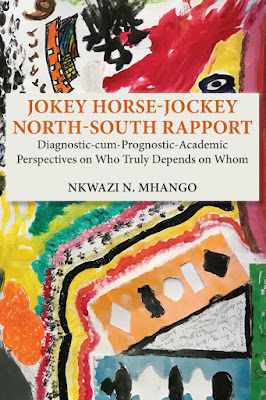 Posted by Ndugu Nkwazi N Mhango at 17:45 No comments:


Posted by Ndugu Nkwazi N Mhango at 09:24 No comments:

My Newborn Baby "Born Nude" is out

Born Nude is philosophical poetry that explores myriad themes, from equality to humility and environmental consciousness. It is divided into chapters that pinpoint specific areas of interest. The author delves into human weaknesses and strengths based on nature and nurture. He invites the reader to contemplate the ephemeral nature of all things material, and how to nurture oneself into a higher order and loyalty of being human. The volume’s satirical tone is critical of the destructive sterility of zero-sum games of superiority and dominance. It treats as anathema exploitation based on contrived hierarchies of gender, geography, politics and the geopolitik of the modern world.

Posted by Ndugu Nkwazi N Mhango at 18:48 No comments:

This month eight years ago the world lost a famous Zimbabwean  musician, Cephas Mashakada whom we today commemorate. Mashakada died 51 years old. His music however still lives on.
May God rest his soul in eternal peace.

Posted by Ndugu Nkwazi N Mhango at 17:56 No comments:

SOMETIMES I REMEMBER TIMES WITH MUSIC


Posted by Ndugu Nkwazi N Mhango at 18:08 No comments:


Posted by Ndugu Nkwazi N Mhango at 20:42 No comments:

Tanzania is gearing up for the next phase of general elections; which are scheduled to be held later this year, and next year. Are these elections genuine democratic exercises, or mere window-dressing events?
Soon after the conclusion of the  last  Ugandan Presidential elections in 2016; a  writer in the  Ugandan media  made the following scathing comments:  “Presidential elections in Uganda had been stolen by the declared winner  President Yoweri  Museveni, and therefore, in terms of sustaining democracy, they were actually useless and meaningless”  He also made other serious allegations regarding how, in the past, votes had been stolen by Presidential election winners in Mozambique, Namibia and Zimbabwe. He then concluded by claiming that:  Elections in Africa are a joke. Africans are given to stealing elections.”

Posted by Ndugu Nkwazi N Mhango at 18:28 No comments: