Posted by Ndugu Nkwazi N Mhango at 18:09 No comments:

Costs of Hamad, Lipumba’s feud go beyond their party 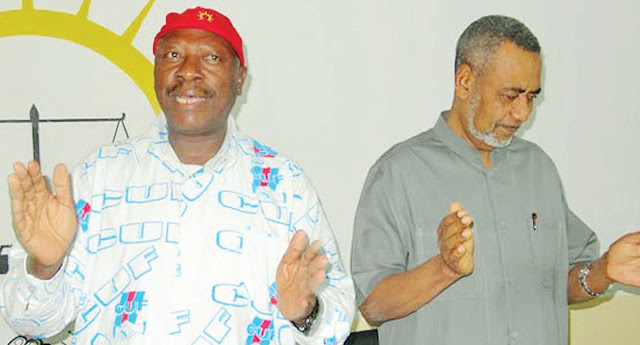 This piece came out three years ago showing how things would play out in what is now obvious in the politics of Bongo. As the fate would have it, it seems; the Chairman of the Civic United Front (CUF) Professor Ibrahim Lipumba and his Secretary General Seif Sharriff Hamad are hell-bent to kill it; and destabilise opposition in general. This is because the duo has never seen the mess they created; and how it’s slowly destroying the party. This isn’t only a big blow for the party but also for democracy in our country. By the look of things, the impasse the CUF has been in for a while is but a suicidal attempt for the party and its leadership.
Considering the resources and time the mix-ups between the duo have already consumed not to mention the relationship gone sour, there is no way all or any of the two can benefit from the ongoing imbroglio without sitting on the round table and iron out their differences.  The duo has discretion to accept such advice or go on their suttee. However, surely the only winner is the ruling party. Due to hegemonic nature of our politics, it seems; the duo has hijacked the party so as to pointlessly leave the members in the cold. This means. The CUF has never belonged to the members. Instead, it has always been the private estate of the leaders. This is why, the members are not heard. Nor are their views accommodated in addressing the problems the party has, for long, faced.
Interestingly, history has the tendency of replicating itself. Those who know how James Mapalala, the founder of the CUF, was thrown under the bus don’t wonder to see Hamad suffering from the same fate. Live by sword. Die by sword. So, too, those who wrongly thought that Hamad was using Lipumba now know how the duo was but strange bedfellows. Who was using whom? It isn’t easy to tell. More importantly, the CUF has always seen to incline to one side of the United Republic of Tanzania (URT). Refer to how Hamad entered into the Government of National Unity (GNU) in Visiwani without bothering to do the same in the Mainland. Strikingly, you wonder how one party can win in one side of the union and lose in the other. This shows where its priorities are between the duo.
Demonstrably, the game the duo is playing is very lethal; however, thanks to their personal ambitions, they seem to pooh pooh it for their peril. For over a year, they’ve been trading insults, bloviating, pontificating, calling each other names and expelling each other in what started as a spat among others. There is no way they can maintain squabbles and meaningfully forge ahead. This is why they are easily played against each other; simply because they are playing in the hands of their enemies. What the duo is doing is like dancing with the devil thinking that there is a way one can get away with it. When two friends do their dirty laundry in the agora, the shame that comes therefrom affects both equally.
Provided that the fate of the CUF is clear, what can be done to save or salvage it?
Firstly, the duo must admit responsibility; and accept that they are the party of the problem but not the solution. Therefore, they should start addressing the problem based on this understanding instead of the blame game that has been going on for a long time. Knowing and admit the roles they have played in destabilising the party are key to the resolution of the conflict. In conflict resolution studies we say that there must be the stage at which the conflict must be allowed to thaw so that those ensnared in it can start using different lenses, positive instead of negative ones to view each other based on their needs.
If the first mechanism flops, the members should shun; and thereafter expel the duo so that they can start afresh to either mend fences or tweak their parties.
In sum, Hamad and Lipumba have the solutions to the problems they created. So, too, they have the means to fell the CUF. Destruction is easier than construction. Again, this being obvious, why Hamad and Lipumba are putting their dirty linens on the agora?
Source: Citizen Wed., 3 October, 2016.
Posted by Ndugu Nkwazi N Mhango at 15:14 No comments:


Posted by Ndugu Nkwazi N Mhango at 10:36 No comments:

What Does This Photo Remind You Personally? Posted by Ndugu Nkwazi N Mhango at 17:22 No comments:

KUDOS TO THE PROPOSED LAUNCHING OF THE ‘MWALIMU NYERERE LEADERSHIP FORUM’.

THE CITIZEN ON SATURDAY of 9th March, 2019; carried the good news of the planned launching of what will be known as the “Mwalimu Nyerere Leadership Forum”. It was reported that the Forum is scheduled for launching on 30th March, 2019; and that this Forum will be aimed at “discussing the legacy of Mwalimu Julius Nyerere, and how the current generation can use his intellectual wealth for community development, plus the lessons of his life and agenda, in relation to current realities”.  This is certainly very good news for all those who sincerely admire Mwalimu Nyerere’s vast contributions to the making of our nation; in the light of the solid foundations of  ‘good responsible leadership’ which he laid down, and which continue to  form the ‘cornerstone’ of his legacy.   I am one of those devout students and admirers of Mwalimu Nyerere. I therefore undertake to participate fully in supporting the work of this new Forum.  And, in order to ‘hit the ground running’; today’s article will be a presentation of some of the most memorable components of Mwalimu Nyerere’s legacy.


Posted by Ndugu Nkwazi N Mhango at 20:34 No comments:

Did Boeing See the Boeing 737 Max Tragedy Coming and Ignore It?

Recent plane crashes involving the Boeing 737 Max left the world grieving and questioning the airworthiness of this model. Within six year, two brand new aircraft killed over 300 hundred passengers. The first occurred in Indonesia and the second one in Ethiopia just two days ago. Looking at the clip hereunder, you can see how this tragedy was in the making ten years down the line even before the aircraft took to the skies. Here we are talking of Boeing 737 Max. The much touted Dream Liner 787 has its own dark clouds too. Shall Boeing keep on this big lie, the European Airbus will soon fill in the gap and take the control of Airplane production. Though I cannot judge now, shall Boeing go on being unethical, it should forget its dominance it enjoyed for many decades. Please watch this  clip and come with your own verdict as a potential passenger.

Posted by Ndugu Nkwazi N Mhango at 14:44 No comments:

CONSTITUTIONALISM AND POLITICAL CHANGE IN TANZANIA.

By PIUS MSEKWA
Former Speaker of the Parliament of Tanzania.


Posted by Ndugu Nkwazi N Mhango at 11:23 No comments: