Zimbabwe election; will Jongwe punish Croc or square it? 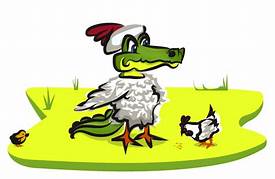 Former Zimbabwe strongman, Robert Mugabe aka Jongwe or rooster, may be history vis-à-vis power.  However, his influence on Zimbabwe is still immense. Zimbabwe’ll go to general elections this year in which Mugabe’ll throw his weight behind the New Patriotic Front (NFP) party (VOA, March 5, 2018). Incumbent president Emmerson Dambudzo Mnangagwa aka Ngwena, will fly ZANU-PF’S flag.  Will Zimbabweans have a sound choice between two protagonists behind the mess the country is in currently? Is the new party real new?  The coming elections, essentially will act as a Jongwe-Ngwena duel.
Apart from Jongwe and Ngwena, there is the Zimbabwe Defense Forces (ZDF) which, essentially ousted Mugabe.  Will its political-turned-politicians bigwigs want a piece of the cake by penetrating their comrades in order to have a grip on power?
That’s the one side. We know that he who pays the piper calls the tune. We saw top brass being appointed ministers which is tad confusing. Are they military or politicians? Zimbabweans need to know. Will this marriage of convenience last? Who’s using whom; and what does Zimbabwe have to gain or lose from such cobbled marriage? Arguably, it isn’t easy to tell the type of rule Zimbabwe is under now. I’d like to carry it hermaphrodite if not an oxymoronic to mean; it is neither purely military nor political. It is polimilitary if not a milipolitical regime.
The coup that’s called internal correction left many questions than answers as far as the future of Zimbabwe is concerned. As one Zimbabwean Lance Guma once put it, was the problem Mugabe or his outfit the Zimbabwe African National Union-Patriotic Front (ZANU-PF) which he equates with the snake in that Mugabe was a skin whose overthrow means just shedding the skin as it remains as poisonous as it has been for three decades.  Now, let’s dissever Jongwe-Ngwena.
First, Mnanggwa was part and parcel of the same system renowned for his ruthlessness and cunningness in dealing with dissent voices. Refer to the Matabele massacres he supervised not to mention controversial road accidents that claimed the lives of many Zimbabweans who showed to be competent and amiable to the hoi polloi.
Secondly, Mugabe presided over a corrupt and ruthless government under ZANU-PF that propped him; and fully supported what he’s accused of. Has Zimbabwe pulled down the Capon and ushered in a Crocodile? Is Zimbabwe now at Oginga Odinga’s Not Yet Uhuru time or Chinua Achebe’s No Longer at Easy if not Ngugi wa Thiong’o The River Between?
Again, the Capon’s domination tendency while the Croc has ruthlessness. Will Zimbabweans judge Mugabe harshly as they myopically and softly spare Mnangagwa and the ZANU-PF for their peril; or take the bull by the horns. Logically, the ZANU-PF is the only vehicle Mugabe and his cronies used to lord it over Zimbabwe for over three decades. Therefore, there’s no way one can emancipate Zimbabwe without deconstructing the ZANU-PF among others.  Will Zimbabwe and their new leaders who practically are nothing but the extension of Mugabeism, smell the coffee; and do things based on the history of their suffering namely deconstruct and overhaul the whole system? Will they force the Croc to turn itself into a fish or allow it go on devouring them? Will the Croc cling to its nature?
Due to the newness of the situation, nobody’s any inkling of what’ll follow except the Zimbabweans themselves. Importantly, they must avoid fearing the lizard to end up embracing the Croc despite all looking alike. The Lizard’s no teeth while the Croc’s high-pitched ones. Will the words of Gibson Lovemore, a street vendor that Zimbabwe has got rid of a snake and replaced it with a snake come true?
Further, even the army that started the ouster of Mugabe is the one and only that kept Mugabe in power for over period of 37 years. Has the ZDF become the born again for the love of the people or their man? Apart from being the part and parcel of the mess that saw Zimbabwe being misruled for many years, is the ZDF piloting in the era where the gun is becoming mightier than the vote? Are we seeing the military democracy or a coup ala Zimbabwe coup? Who’s using whom between the army and Mnangagwa?  Who’s in charge between the duo?
Will Zimbabweans sanction the army and its man to get away with murder? Will they revisit the history of Mugabe’s jumble so as to weed out all who partook in its making? Will they be blinded by euphoria and sanguinity or being guided by logicality? Many’d like to know how Zimbabwe will look after the coming elections, especially without Mugabe on the helms. For, like any despot, Mugabe turned himself into Zimbabwe. He’s Zimbabwe and Zimbabwe’s him. This is why it’s easy for his wife to dream about using their bed relationship to take over from her husband. Will Zimbabweans really credit Grace as the tool that, like Delilah and Samson, enabled them to get rid of Mugabe to end up embracing the Croc? Again, was Mugabe that bad or Grace herself? It is not easy to tell which way Zimbabwe’s heading for, especially if we remind ourselves of a long and controversial marriage between the Jongwe and the Ngwena. It is upon voters to decide how their country will look like. However, the choice is very hard.
Source: The Citizen, May 23, 2018.