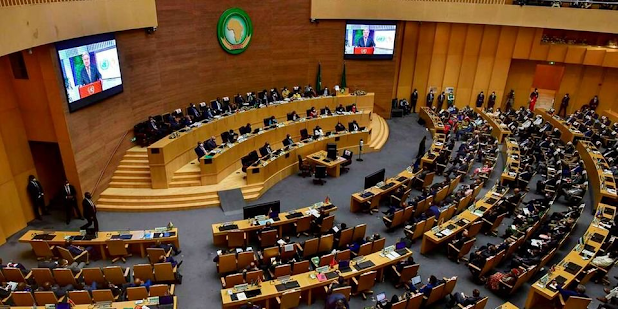 UN Secretary-General Antonio Guterres addresses Presidents and delegates via a telecast during the 35th Ordinary Session of the African Union (AU) Summit in Addis Ababa, on February 5, 2022. In its relationships with the world, Africa can no longer be a consumer of the ideas of others.

Professor at SUNY Buffalo Law School and Chair of the KHRC.

I want to underscore four imperatives that Africa must internalise in its relationship with the world, and within Africa.

These are the pivots for Africa’s renaissance. First, the world is no longer simply a piece of geography.

The world is today an idea by which I mean no one and nothing – states or peoples – can silo and isolate themselves.

Virtually every barrier has, or is, coming down. These include barriers of geography as represented by national borders, notions of citizenship as exclusive possessions of nationals within a state, and barriers of identity that prevent gender, colour, religion, political opinion, ethnicity and other cleavages dividing “us” from “them”.

Technology is breaking down all sorts of nativism and creating a plethora of untold possibilities. What is going to matter going forward isn’t where you are born, but where you can go, and the beauty of today and tomorrow – unlike yesterday – is that you can go anywhere. This is the first thing African states, peoples, civil societies and business interests must realise. Silos don’t exist anymore.

It’s the superiority of ideas that has become paramount over everything else. Those who do not produce will be dominated by those who do at both the national and international levels. Produce ideas, or perish. Even within states, internal political competition will increasingly become a contest of ideas, not of identity. When you compete internally, ask whether you are competing for Kenya, or solely for your ethnic group.

Second, in its relationships with the world, Africa can no longer be a consumer of the ideas of others. Africa will not be able to play effectively at the global level unless it becomes a key producer of ideas.

Thus Africa’s external posture – with its head craned in a begging and longing posture towards either the West or the East – is not a viable condition of existence. That mentality of “otherness” or of inbred subordination in which the master-servant, inferior-superior construct exists must be expunged from our consciousness.

But pursuing a pan-African identity doesn’t mean that Africans will be cynical about aspects of universality that have legitimate, universal and global purchases. These include foundational principles such as the rule of law, democracy, social justice and equity.

If we don’t create and nurture free societies in Africa, we won’t be able to play on an African, let alone a global, plane. States and societies that are riven by corruption, impunity, extreme forms of exploitation and social injustice beget extremism and social dysfunction.

That’s not where Africa wants to go. In this regard, Africa’s elites – the political intelligentsia, civil society and business – must cohere societies of empathy, not societies of exclusion. Those who see domestic politics as a zero-sum game, where the “enemy” must be vanquished, are the real enemies of Africa. We must fight them the way we fought colonialists for they are a mortal disease. Let’s fight for political power, and use it to put ourselves on the global map.

Third, there is no future for an Africa that remains balkanised. No single African country can leverage global forces and trends by itself. That’s not how new geopolitical and market dynamics work. Hostilities and negative rivalries between and among African states are the banes of the continent’s prosperity.

Regional synergies are indispensable for creating larger blocs for trade, diplomacy and geopolitical bargaining.  Africans must tear down the walls that keep their people apart. Otherwise individual African states would simply be prisons where we are trapped for exploitation by internal and external forces. Such a state would need to be overthrown, or smashed, by the people. This is what African leaders must remember every time they go to bed at night.

Fourth, and finally, regional integration must be used to create and nurture values that give meaning to every African citizen. Africans should grow national and regional economies and markets, and do so not by replicating exclusions and marginalisation of certain groups in society.

Hang on to power

Regionalisation should strengthen countries, not incubate practices that tear them apart. A case in point is the push by some leaders to hang on to power beyond their mandates.

Finally, African regional institutions must be real, not fake, cynical or hypocritical. They must mean something to Africans and to a global audience. Here, I can’t help but refer to the reaction of some Africans towards the International Criminal Court. That court would be totally unnecessary if as Africans we got our act together.

Let me conclude with a few caveats. We must remember that no society in history has ever developed without a great elite and a dominant intelligentsia. Those who don’t or can’t think are doomed. And this is not just the damnation of material things.It’s a damnation of the spirit, of the people’s zeitgeist. Secondly, we must remember great nations are built by individuals acting collectively. That’s why as Kenyans and Africans we don’t have the luxury of wasting a single human being. Let’s all rise together as one.