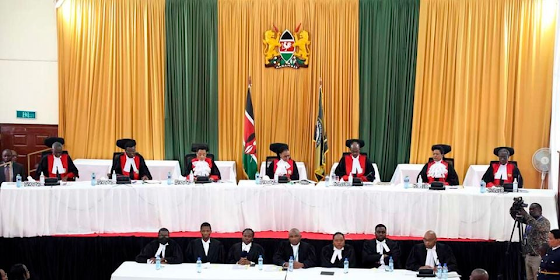 By Makau Mutua   Professor at SUNY Buffalo Law School and Chair of the KHRC.

On this glorious Sunday, I treat you to the last instalment of my series on ‘Kenya’s Fake Democracy’. But let me note, parenthetically, that democracy is about disagreement, not agreement. This is the genius of liberalism. Its central core is built on dissensus, not consensus. Progress comes from thoughtful contradiction, not thoughtless, or coerced, concurrence. That’s because consensus is an anti-democratic impulse that suppresses free expression and thought.
It’s in this spirit that I take a cudgel to Chief Justice Martha Koome and the Supreme Court she leads. I do so not to vent, but to chip away at Kenya’s fake democracy. Those who wear the robes of justice must be just, or face the wrath of the vox populi. Allow me to do full disclosure. First, let me own up to the fact that CJ Koome – long before she assumed the lofty mantle – was a good friend. She was forged in my side of the street in the crucible of civil society and the intelligentsia.
We could always finish each other’s sentences. That’s because we knew what we wanted for Kenya. She was in the fight against the Kanu kleptocracy and dictatorship. She was always the first to pick up the weapons of dissent against human rights violations by the State.
She was also a feminist par excellence. There’s not a literate mind in Kenya that doesn’t know her pioneering role in the Federation of Women Lawyers (FIDA), Kenya’s premiere women’s rights organisation.
Coarse and crude language
CJ Koome fought gender-based violations in both the public and private squares. She was an implacable foe of violence against women and girls in the home.
Several leading male Kenyan politicians know only too well her unbending will to confront them for spousal battery. Some of those politicians used to quake in their boots at the mere mention of her name. She was one of the founding mothers of the 2010 Constitution.
We at the Kenya Human Rights Commission collaborated with her and FIDA in entrenching gender equity and equality in that charter.
That’s the Martha I knew, even after she took the lower benches of the Judiciary. But power can get into heads of folks, and intoxicate them.
As is known, in 2016 I ran for Chief Justice, but the Judicial Service Commission was of a contrary opinion. That’s water under the bridge now. But after my interview – which lasted some four hours – now Senior Counsel Martha Karua and I went to Judge (as she then was) Koome’s residence to help prepare her for her interview for the Deputy Chief Justice position.
Together with a group of younger women lawyers, Ms Martha Karua and I took Judge Koome through her paces. We spent hours with her. We felt great about the mock interview prep and believed she would make a fantastic DCJ. I thought she would be a great partner if both of us had been selected.
Some people weren’t thrilled about how CJ Koome was selected for the position. Several felt there were stronger candidates. Others went even further to question her academic credentials. But most, including me, thought she would stick to her civil society human rights DNA in spite of a number of questionable opinions in the courts below.
That was until the presidential election petition Raila Odinga vs William Ruto and the Independent Electoral and Boundaries Commission following the debacle of the August 9, 2022 elections.
The proceedings started innocently with CJ Koome conducting the court with decorum and an admirable judicial temperament.
I felt good by the time opposing counsel made their final submissions. It was clear that Mr Odinga’s Azimio La Umoja had proven its case hands down.
I need to say that the legitimacy of any court anywhere on the planet isn’t in weapons of war, but in the perception of the public, especially the litigants and those accused before it. Justice must not only be done, it must be seen to be done.
That’s where the power judicial forums come from. But in the presidential petition, CJ Koome read a screed, not a judgment. In a shocking departure from centuries-old judicial tradition, she tore off her robes and became a gladiator on the side of Mr Ruto’s Kenya Kwanza.
Coarse and crude language
In coarse and crude language, she lit into Azimio’s case and even used fiery and abusive verbiage. I was stunned. Where had the judicious and fair judge gone?
The Supreme Court of Kenya is the forum of last resort in the Judiciary. I will not repeat here the unbecoming language used by CJ Koome, but if the court of last resort – and especially its chief judge – angrily foams at the mouth at litigants while reading a ruling, then we have no Supreme Court to speak of.
What we have instead is a political court that is a combatant in the contest between litigants. I don’t know how the Koome Court can live with itself after that ruling. What will the judges tell posterity? How can the Supreme itself be a participant in keeping Kenya’s fake democracy alive?
Makau Mutua is SUNY Distinguished Professor and Margaret W. Wong Professor at Buffalo Law School, The State University of New York. @makaumutua.
Source: Sunday Nation.
Posted by Ndugu Nkwazi N Mhango at 16:25