Kibaki and the promise of a truly reformist state 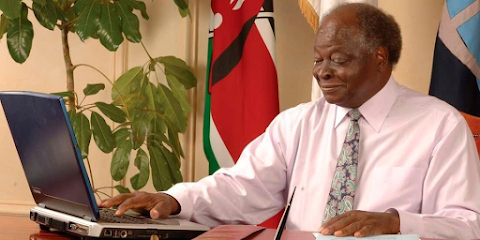 Makau Mutua Professor at SUNY Buffalo Law School and Chair of the KHRC.

I, too, have my own Kibaki story. It was a couple of days to the 2002 elections. Out of the blue, I got a phone call from Alex Muriithi, President Mwai Kibaki’s late nephew. May both their souls rest in peace. I had only got to know Muriithi as the campaigns kicked into high gear.

I wasn’t part of the campaign, although I had publicly endorsed Mr Kibaki. So, I was curious why the call, which came through the now obsolete Nokia 3210. “The next President wants to see you,” Mr Muriithi, an imposing man, intoned. He asked me to report at Mr Kibaki’s Muthaiga residence at a certain time. I took Dr Willy Mutunga with me.

Dr Mutunga and I didn’t know what to make of the request, which was more like an order. But we showed up on the appointed time. At the gate, we saw some very senior Liberal Democratic Party luminaries who were awaiting their turn to be allowed in.

I called Mr Muriithi and told him we had arrived. A beefy fellow appeared, opened the gate to the estate, and ushered Dr Mutunga and I in. I had never been there before, and so my eyes carefully combed the grounds of Kenya’s next Commander-in-Chief. It was an elegant and well-manicured compound. We were shown to the living room, where a key aide was nonchalantly munching – actually gnawing – on a sandwich.

A certain renowned doctor was on duty, as Mr Kibaki was recovering from the so-called “Machakos Accident”, which nearly took his life days to the election. The said doctor casually inquired about our mission. We told him Mr Kibaki had summoned us. He wondered why. I responded that we didn’t have the foggiest. He then waved us off and told us that Mr Kibaki was indisposed and couldn’t see, or be seen, by folks. The way he pronounced folks made me think he thought of us as the hoi polloi. But we took the slight in our stride. Dr Mutunga and I shrugged and told him we hadn’t invited ourselves. He wouldn’t budge, and asked us to leave.

We didn’t care, either way, but we thought the good doctor wasn’t being straight with us. But the fog lifted magically soon thereafter. Mrs Lucy Kibaki, then First Lady to be, strode into the room and expressed consternation at our presence in her house. “Professor,” she asked with authority, “what are you doing here?”

Now, I was sure we were being kicked out. But no – Mrs Kibaki then quickly added, “it is good to see both of you.” I informed her of the mystery of our presence there, and the predicament we were in, given the doctor’s no-frills position. To our shock, Mrs Kibaki pushed the doctor aside and brought us into Mr Kibaki’s bedroom, where he lay on a hospital bed.

I didn’t look back to find out what became of the obstructionist doctor. There was Mr Kibaki, his wide eyes staring at us. I immediately saw the warmth in his eyes. He cracked a wry smile. He welcomed Dr Mutunga and I with enthusiasm and asked us to sit down. He said to me, “Professor, you remind me of myself as a young Makerere University lecturer eons ago.” I nodded appreciably. I had met him several times before and admired his decency, gentlemanly manner, and careful use of language. He turned to Dr Mutunga and said, “Wewe ulitoroka” [You absconded]. I learnt later Mr Kibaki was ribbing Dr Mutunga for declining be chair of NAK, a nascent party.

As is sometimes done in America, I asked if I could sign the cast on his leg. He obliged, whereupon I took a blue pen and scribbled my well wishes on the cast. He then got down to business. He said, matter-of-factly, that he was going to clean up the country of rot.

I understood that he wasn’t talking of literal garbage, but corrupt elites. He asked us what he could do. I quickly told him that a truth commission, which I and the Kenya Human Rights Commission had been promoting, would be the broom he needed to clear the human filth. He promised to set it up at the earliest opportunity. I immediately ascended to cloud nine with delirium.

He asked me to prepare a list of appointees to senior positions. I was stunned. He then asked me to prepare a second list – of people who must never be appointed to any public office. I worked with Dr Mutunga to compile both lists. Then Mr Kibaki’s health deteriorated and the project went cold until one day I received a call as I was discussing the transition with Professor Peter Wanyande and Dr Karuti Kanyinga at the University of Nairobi. I was summoned to State House and instructed to deliver the two lists. I didn’t see Mr Kibaki, but a shadowy apparatchik who grabbed the lists. I later saw many people on the “don’t appoint” list in power.

President Kibaki went on to recover from the accident and its debilitating after-effects. By then, it was too late to recover the early promise of a truly reformist government. Cartels had moved in and cannibalised the progressives. Even so, President Kibaki with ODM’s Raila Odinga as PM in the coalition government brought back Kenya’s economy and built admirable infrastructure. May President Kibaki RIP.