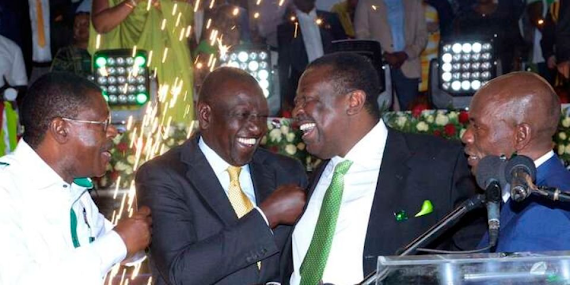 By Makau Mutua
Professor at SUNY Buffalo Law School and Chair of the KHRC.
I’ve always had a soft spot for ANC’s Musalia Mudavadi. Although he was born with a silver spoon in his mouth, he’s always been a sympathetic chap.
He’s soft-spoken and carries himself with a gentlemanly mien. Fact is, Mr Mudavadi is simply a nice guy. Or was. But what happened last Sunday – at his self-proclaimed Bomas of Kenya “earthquake” – could transform him forever. And not for the better.
It’s true that desperate times call for desperate measures. But was political life so intolerable Mr Mudavadi had to jump into bed with Deputy President William Ruto, a man he’s excoriated with utter disdain and mockery? Let’s peel the onion. Mr Mudavadi had promised an earthquake. Something on the magnitude of 8 on the Richter scale. He had ominously warned that Kenya’s political landscape would never be the same again. I waited with bated breath.
The first anti-climax was the choice of MC, one Senator Cleophas Malala. Mr Malala is known for his political somersaults and flip-flops than for any serious work as a legislator. He fulminates endlessly about theatrics. He could be a bona fide comedian. If you expect a political earthquake, you don’t invite a comic to preside over the event. You need gravitas – someone with oomph. That was Mr Mudavadi’s first letdown. Secondly, you make sure you are the focal point. You must never be overshadowed.
Roadkill in politics
But Mr Mudavadi had to be himself. He’s always been Mr Nice Guy, a defect that’s made him roadkill in Kenya’s treacherous politics. Americans say that politics ain’t beanbag. Take the 2002 elections. Mr Mudavadi holds the unenviable distinction of the shortest serving vice-president in Kenya’s history. Former President Daniel Moi appointed him VP on November 4, 2002. He was out on January 3, 2003, a fleeting 60 days later.
Mr Moi, the self-styled professor of politics, had elevated Mr Mudavadi to woo the Luhya as running mate to Kanu’s Uhuru Kenyatta. They were trounced by nearly two-thirds of the vote by Narc’s Mwai Kibaki. To add injury to insult, Mr Mudavadi was ejected from his Sabatia seat.
Kenyan voters can be very good when they are good. They punished Mr Mudavadi for being Mr Moi’s patsy. You could smell change in the air in 2002. Kenyans were sick of Mr Moi and the Kanu kleptocracy. On the wings in Narc were the Young Turks who had led the Second Liberation. It was clear that no one associated with Mr Moi would survive the Narc juggernaut.
But voters punished Mr Mudavadi for another reason – for lacking guts. He was weak-kneed and failed to stand up to Mr Moi.
People do not want weak leaders. They may not want a bully, but they surely don’t want a leader whose lunch is eaten by others without a fight. That’s been Mr Mudavadi’s political identity. In the One Kenya Alliance (OKA), he was clearly second fiddle to Wiper’s Kalonzo Musyoka. But rather than stay in the tent and fight for his share, he fled when the kitchen got too hot. Taking flight is a mark of cowardice, but I might have forgiven him if he hadn’t jumped from the frying pan and into the fire.
The real earthquake at Bomas wasn’t that Mr Mudavadi vomited on Azimio la Umoja. No. The main event wasn’t Mr Mudavadi announcing his lame presidential bid, which even he himself doesn’t believe in. The actual earthquake was Mr Ruto and UDA swooping in like barracudas and swallowing Mr Mudavadi and his brigand whole.
At his own event, Mr Mudavadi was turned into a giggling bride – nay, bridesmaid – by Mr Ruto. Mr Ruto marched in there with his troops and took over. Some people on social media suggested – and I have no evidence one way, or another – that Mr Ruto had paid for the ANC jamboree. But before Mr Ruto arrived, the event had been turned into a fiasco when Mr Mudavadi’s OKA co-principals – Mr Musyoka and Kanu’s Mr Gideon Moi – stormed out after learning Mr Ruto would strut in there and take over.
Kept his mouth shut
Mr Mudavadi didn’t even have the cojones to tell his OKA-mates that Mr Ruto was chief guest. Ford Kenya’s Moses Wetang’ula, an OKA quisling, knew but kept his mouth shut. Bomas wasn’t Mr Mudavadi’s earthquake. It was Mr Ruto’s, but why? Mr Mudavadi has no purchase in the Mulembe Nation.
So, why would Mr Ruto want him as a bride, or bridesmaid – even if you throw in Mr Wetang’ula as a freebie? Is it a head fake by Mr Ruto to hoodwink the Luhya? Or could he, in the last minute, step down for Mr Mudavadi and become the puppet master?
Perhaps Mr Ruto has sensed defeat. He could back Mr Mudavadi to spite Mr Kenyatta and ODM’s Raila Odinga. Then he would back the Building Bridges Initiative (BBI) in a Mudavadi regime to become Prime Minister and run for president in 2027. That’s an earthquake.
Makau Mutua is SUNY Distinguished Professor and Margaret W. Wong Professor at Buffalo Law School. He’s chair of KHRC. @makaumutua
Source: Sunday Nation tomorrow.
Posted by Ndugu Nkwazi N Mhango at 19:13