Riots in South Africa Not About Zuma 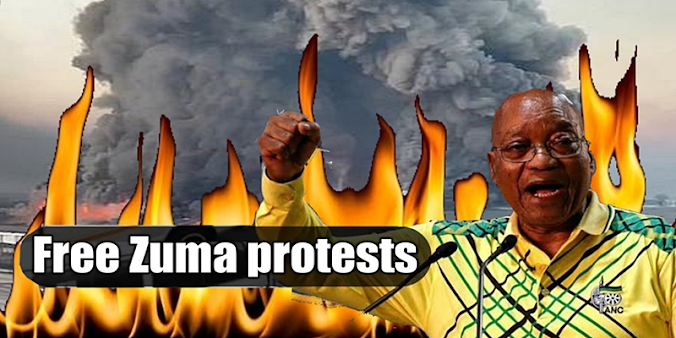 Despite Zuma being one of the architects and beneficiaries of the mega corruption the country has ever seen, Zuma’s shamelessly raiding on the wave of riots cheating himself that it is because of him. There riots are not sympathising Zuma. Instead, they’re using him as a pretext of rooting the way Zuma wants to use the rioters thinking that if he is release from jail they’ll stop rioting. The solution to this imbroglio is not to free Zuma. Instead, the solution is to free the South Africa from the fangs and hands of a few privileged whites and their African pawns in power.  The solution is to embark on equitable and good policies that will free the mass from manmade abject penury. Another solution is for the government to become answerable to the people by telling them what it did to bring the culprits to the book? How much money South Africa lost?

People need land as the capital for their livelihood. Who owns the land? According to the Land Report (2017), the Land Audit revealed that Whites own 26 663 144 ha or 72% of the total 37 031 283 ha farms and agricultural holdings by individual landowners who are just 9% of the population; followed by Coloured at 5 371 383 ha or 15%, Indians at 2 031 790 ha or 5%, Africans at 1 314 873 ha or 4%, other at 1 271 562 ha or 3%, and co-owners at 425 537 ha or 1%. Of all issues that are now dogging South Africa, land is number one.  To address this issue, the government needs to come up with the policies of harmonising land ownership, at least, using quota system based on the composition of the population without forgetting the history of the country. African lost their land to whites when they colonised the country. To do justice, whites need to think about redressing the blacks in order to avoid the Zimbabwe calamity wherein land was seized and poorly redistributed to end up ruining the country.

Apart from land, whites in South Africa own almost everything and black own nothing except for a few greedy and selfish elites in power, who also, survive on the leftovers of the mega wealth of their country as has been the case in many failed countries such as the DRC, CAR, and many more. Such a situation has led to violent conflicts that have destroyed these countries pointlessly. South Africa is no exception when it comes to the dangers  system inequities and injustices pose to the cohesion and existence of the country.

Another thorny but important issue revolves around doable and realistic economic empowerment. This needs to be done through enabling the majority to have access to the means of production such as land so that they can contribute to the betterment of their lives and the economy of the country. South African economy is toxic and lop-sided. Thus, economic tweaking should learn from the chicanery known as Black Economic Empowerment (BEE) a thieving scheme, which became a cropper after making a fewer connected leeches billionaires while the majority became poorer and poorer. The taxes were stolen to benefit fat cats in the upper echelons of power and their foreign masters or quacks such as the Gupta brothers and the Zuma.

In sum, South Africa needs to embark on purposeful deconstruction, decolonization and reconstruction by buying into the ideals of independence but not neoliberal racism that’s turned a blind eye on the injustices and inequalities in South Africa since such criminality serves blue eyed children as opposed to the majority blacks. To make sense of independence, the economy of the country must equally and judiciously serve all citizens. Thus, SA needs to detoxify its economy to meet this requirement among others.