Whereas the world is moving towards nomocracy, Africa is moving away 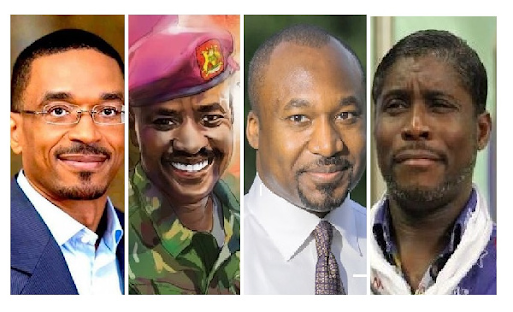 Combination photo (L-R) Paul Biya, Muhoozi Museveni, Cristel Sassou, Teodorin Obiang
Recently, Congolese President Denis Sassou-Nguesso appointed his son Denis-Christel Sassou-Nguesso minister of a newly created international cooperation and public-private partnerships. This didn’t shock many since nepotism in the upper echelons of power is slowly normalised so as to be accepted in some, if not many, African countries. With this barefaced appointment, once again, Africa added another son of the big man who strategically has started the journey of skulking close to his father’s power.  This shows–––shall anything happen to the big man as was the cases in the DRC, Gabon and Togo and just recently in Chad, the legatee apparent may take over from the father. Call these political spongers princes.  For reminder, when Laurent Kabila’s liquidated in 2001, his son Joseph, then a major-general in his father’s army and deputy Chief of Staff of the Armed Forces of DRC, filled the vacuum to mark the beginning of a parasitic family rule in the highest public office in the country already ravaged by violent civil wars and tin-pot dictatorship under thuggish Joseph Mobutu.

Apart from Joseph Kabila, four years thereafter, another prince, Faure Essozima Gnassingbe Eyadema current Togolese president took over after the death of his father, Gnassingbe Eyadema in furthering kakistocracy in the country. Before, Faure was minister of Public Works, Mines and Telecommunications in his father’s long-time dictatorship. Five years soon after, father to son inheritance of presidency’s repeated in Gabon where prince Ali Bongo, one of over 30 children with various concubine, took office after the death of his father Omar Albert Bongo Ondimba who’d ruled for good 42 years. Before, Ali Bongo was Minister of Foreign Affairs and Cooperation in his father’s government.

Africa will always surprise. For, in 2019, like in any necrocracy rather kratocracy, Bongo appointed his eldest son, Noureddin Bongo Valentin, assistant to the president of ‘all affairs of government.’ As if what transpired in the DRC, Gabon and Togo wasn’t enough, in Equatorial Guinea, Teodoro Obiang Nguema Mbassogo­­­–––who’s the currently Africa’s longest serving president–––in 2016, appointed his oldest son, Teodoro Obiang Nguema Mangue his vice president. Family power sharing is neither a boy’s club nor an androcracy. For, Janet Museveni’s a record breaker who’s a minister in her husband’s government. Nonetheless, Grace Mugabe, former Zimbabwe first lady tried to do what Janet’s perfected to no avail after Robert Mugabe’s booted out in a bloodless coup that dashed Grace’s dreams of succeeding her senescent hubby.

Whereas the three trumps above succeeded their fathers, one Karim Abdoulaye Wade––– was Minister of State for International Cooperation, Regional Development (Aménagement du territoire), Air Transport, and Infrastructure in his father’s government–––and Saif al-Islam Gaddafi didn’t. Wade tried to tinker with the constitution to cling unto power to no avail whereas Gaddafi’s butchered by his own people after the uprisings that sank his 42 years rule. The duo, thus, vanished from political scene after their fathers were booted out.  As for Denis-Christel, like Teodoro Mangue and Lieutenant general Muhoozi Keinerugaba Yoweri Museveni­­–––the commander of Special Force Command (SFC, with unclear speciality) in his father’s army–––though haven’t sat on the seat of president, ­­­are the three princes waiting in the wings up until their fathers who’ve clung unto power die like it recently occurred in Chad where long-time tyrant Idriss Deby was killed in war and his son Mahamat ascended to the throne.

This systemic twaddle seems to have been essentialised and normalised in the world. While this kit and caboodle of self-serving monsters has heartlessly held poor citizens of affected countries for ransom, the international community has always turned a blind eye and deaf ear as if what’s been ongoing is legit and normal. Since such covetous pretenders and hypocrites covertly benefit from such rot and thievish dictatorships, human rights are inconsequential. Anyway, when the Universal Declaration of Human Rights was indorsed in 1948, it didn’t apply to black, poor or women.

In sum, whereas democracy’s thriven in the world, in Africa, aeras revolving around nepotism have increased exponentially. Whereas the world is experience nomocracy, Africa’s moving away from it after many countries have made do with nepotic regimes that turned public powers into their private domain.